Due to the COVID-19 pandemic the Jane Goodall Institute USA office is closed. We are more committed than ever to fulfilling our mission and advancing Dr. Goodall’s vision while our staff works remotely.
Our work continues with the generosity of our supporters and the whole JGI family. We are so grateful for your continued support.

In July 1960, at the age of 26, Jane Goodall traveled from England to what is now Tanzania and ventured into the little-known world of wild chimpanzees. Equipped with little more than a notebook, binoculars, and her fascination with wildlife, Jane Goodall braved a realm of unknowns to give the world a remarkable window into humankind’s closest living relatives. Through nearly 60 years of groundbreaking work, Dr. Jane Goodall has not only shown us the urgent need to protect chimpanzees from extinction; she has also redefined species conservation to include the needs of local people and the environment. Today she travels the world, speaking about the threats facing chimpanzees and environmental crises, urging each of us to take action on behalf of all living things and planet we share.

When Jane Goodall entered the forest of Gombe, the world knew very little about chimpanzees, and even less about their unique genetic kinship to humans. She took an unorthodox approach in her field research, immersing herself in their habitat and their lives to experience their complex society as a neighbor rather than a distant observer and coming to understand them not only as a species, but also as individuals with emotions and long-term bonds. Dr. Jane Goodall’s discovery in 1960 that chimpanzees make and use tools is considered one of the greatest achievements of twentieth-century scholarship. Her field research at Gombe transformed our understanding of chimpanzees and redefined the relationship between humans and animals in ways that continue to emanate around the world.

“A sense of calm came over me. More and more often I found myself thinking, This is where I belong. This is what I came into this world to do.” On the path to becoming the world’s leading primatologist, Dr. Jane Goodall redefined traditional conservation. In 1977, she founded the Jane Goodall Institute to support the research in Gombe and scale up the protection of chimpanzees in their habitats. In the late 1980s, it became clear that Gombe was only part of the solution to a much bigger, rapidly growing problem of deforestation and declining chimpanzee populations across Africa. Knowing that local communities are key to protecting chimpanzees, she redefined traditional conservation with an approach that recognizes the central role people play in the well-being of animals and habitat. In 1991, when a group of young people confided their own deep concerns, she invited them to co-found Roots & Shoots, a program at work with young people in 100 countries to foster the informed generation of conservation leaders our world so urgently needs. A Global Force for Compassion and Action

Today, Dr. Jane Goodall travels around the world, writing, speaking and spreading hope through action, encouraging each of us to “use the gift of our life to make the world a better place. “As a conservationist, humanitarian and crusader for the ethical treatment of animals, she is a global force for compassion and a UN Messenger of Peace.

“Until We Have Peace and Harmony With the Environment, We Will Never Live in a World of Peace.” Every day, Dr. Jane Goodall exemplifies the difference one person can make. Over the years, her groundbreaking research at Gombe has attracted many women, who were nearly absent from the field of primatology when she began. Today, women lead the field of long-term primate behavioral studies around the world. She also inspires hundreds of thousands of young people to take action in their own lives and communities through the Roots & Shoots youth program. Now 100 countries strong and growing, Roots & Shoots is an unprecedented multiplying force in conservation, giving young people the knowledge and confidence to act on their beliefs and make a difference by being part of something bigger than themselves.

“I think to be fully human, we need to have meaning in our lives, and that’s what I am trying to help these young people to find.” Where in the World Is Jane?

See what she’s doing today, and where she’s headed next 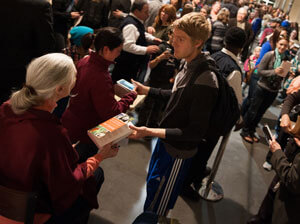 Request An Interview With Dr. Jane Goodall Or a Member of Her Team » 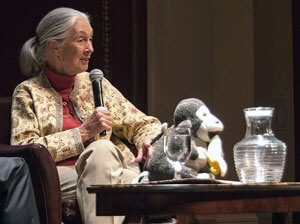 Join in her adventures and discoveries on every page

From Jane to You